The mood during Orlando Pirates’ training seesion yesterday was exciting as Head Coach Eric Tinkler took them through their paces in the team’s final session before leaving for Egypt to face Zamalek SC. Tinkler  had a chat with Orlandopiratesfc.com after the training yesterday, expressed his joy with the players returning from injury and those who are coming back from international duty. 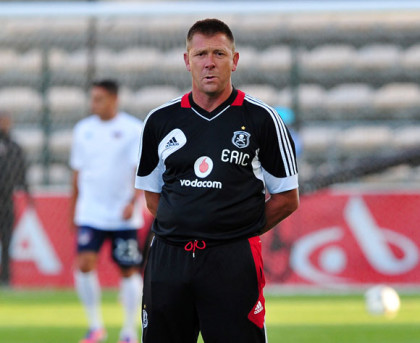 “It definitely has given me a selection headache to finalise the squad going to Egypt because everyone is eager to go, we have had good training sessions with the guys that remained with the Club during the FIFA break and they all putting in good performances in the friendlies we had during the break,” said Tinkler.

“Offcourse we were also keeping track of all our players who were away doing duty for their respective national teams. I thought they all put in solid performances and they have come back with a positive energy which will surely inspire everyone for the upcoming match against Zamalek.

“What is vitally important for us is that all the returning players came back healthy and injury free with the exception for Thamsanqa Gabuza who received a knock to his knee but has been since cleared by the Club’s Physiotherapist”, concluded Tinkler.

Orlando Pirates players who came back and regropuped with  the squad yesterday after national duty are Felipe Ovono, Edwin Gyimah, Thamsanqa Gabuza and Mpho Makola. Menzi Masuku and Gift Motupa who were both on duty for the National U23 squad are expected to report back today.

Mashaba The Most Successful Coach For Bafana Bafana