Manqoba Mngqithi And Rulani Mokwena Win DSTV Premiership Coach of The Month! The Brazilians were awarded for their run in December.

Co-coaches Manqoba Mngqithi and Rulani Mokwena were given the DSTV Premiership Coach of the Month for December. They managed 16 points from a possible 21.

Masandawana continued their impressive pursuit of the league title. They defeated the likes of Orlando Pirates and SuperSport United in December to aid their run.

“Thank you for the award, but the award belongs to the team.” Coach Manqoba said to the media.

“I must just congratulate the boys, the coaching staff, the support staff and all members of the technical team for making it possible for the team to continue achieving its targets.

“This is one cycle where we did not really have the best performances, we even dropped points. I think we dropped 5 points out of the 21 points that we were supposed to get, and we only managed to get 16.

“But still it was a very good return. Thanks to everyone for making it possible.

“Including the management, the board, the president of the club and the chairman for making the club have all the resources to be able to achieve what we have achieved.” Manqoba Mngqithi added.

The coaches have won all the coach of the month awards so far this season. Manqoba Mngqithi And Rulani Mokwena Win DSTV Premiership Coach of The Month! 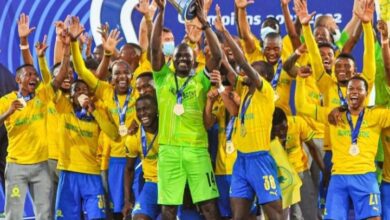