Thanks to the fantastic support and generosity of Springbok supporters, the R1 million-mark was surpassed in the Bok’s #StrongerTogether for R32-12 campaign, which raises money for hunger alleviation in struggling communities as a result of the COVID-19 pandemic.

The final prize – a VIP Test Match experience including local flights and accommodation – was announced on Wednesday and SA Rugby has urged people to buy tickets before the competition wraps up on Friday.

This means Springbok supporters have a few more days to buy a raffle ticket to enter the draw to win some of the most unique, personal items used by the Springboks during their triumphant 2019 Rugby World Cup campaign.

Entries will close at 13h00 on Friday, 3 July and winners will be announced via a live draw on the Springboks’ Facebook page on Wednesday, 8 July.

Springbok captain Siya Kolisi said: “We’ve got three days to go to get your ticket for R32-12 – you can win a jersey I played in at the Rugby World Cup, some other players’ jerseys, breakfast with Coach Rassie, we’ll even bring the Webb Ellis Cup to your own house.

“Please support our campaign, every cent counts. Thank you for your support so far – we are definitely #StrongerTogether.”

SA Rugby’s hunger alleviation campaign was launched just over a month ago and to date just over R1 million has been raised for charity organisations Food Forward SA and Gift of the Givers.

Every member of the 2019 Springbok RWC squad, as well as the coaches, donated a unique prize which can be won by buying raffle tickets for only R32-12, which pays homage to the Boks’ winning score in the final last November in Japan.

There is also a Schools Challenge, where all schools are asked to support the campaign and sell as many tickets as possible to support the cause. The school which sells the most tickets before the campaign ends on 1 July, will have the honour of welcoming the Webb Ellis Cup at their school for a “personal visit”.

Gilbert, official ball supplier to RWC 2019 and SA Rugby, has also come to the party and added a limited-edition replica Cup final ball for every winner, commemorating last year’s final, which the Springboks won, 32-12 over England.

And ASICS, official apparel sponsor of the Springboks and SA Rugby, have thrown into the prize pool commemorative World Cup GEL-LYTE III sneakers and a new Springbok jersey.

Kolisi has been actively involved in struggling communities since the outbreak of the pandemic and said: “I went hungry when I was a kid, but it was nothing as bad as some people are suffering right now. We might not raise millions, but you don’t know how much it means to each single person to have one proper meal a day – it could save their lives right now.”

To find out more on the campaign, click here, or you can head straight to Computicket to buy. 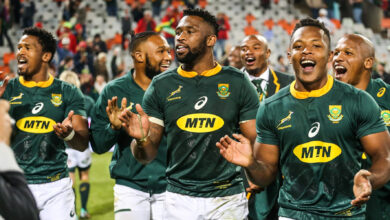