Kaizer Chiefs lost 2-0 away to Mamelodi Sundowns in the DSTV Premiership on Sunday. Head coach Stuart Baxter is adamant that the result isn’t a true reflection of the match itself.

The Scot has somewhat of a point. Chiefs had more of an attacking impetus in their game.

The Glamour Boys’ statistics in the game prove their coaches point. They created more chances, had more shots on goal and on target, while also having more possession of the ball.

“The second goal really killed the game.” The new boss said to the media.

“It killed the impetus because it forces my hand to try to make changes that will get us a goal.

“We went to a diamond and a back four instead of a back three and took a bit of a chance and got ourselves a penalty that was maybe going to be a barnstorming finish if we had scored it,” he exclaimed.

“We ended the game losing it 2-0 which is by far not a true reflection of the game, given the quality of our performance.

“I am pleased with the performance, not the result obviously and certainly not pleased with giving away two poor goals from our point of view,”

Midfielder and substitute Lebogang Manyama missed an 84th minute penalty in the game. This is when the score line was 2-0.

This could’ve made the game more challenging for the hosts towards the end.

“We have four or five penalty takers. When they are on the field, and they say they don’t want to take it I have very little control over where the responsibility goes.

“I think you go to listen to the players and the one who has the confidence to take it should take it” he said. 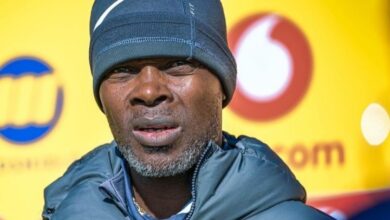 Zwane admits they’d like to have Nga and Letsoalo