Football Fans React To Baxter Appointing His Son As Bafana Goalkeeper Coach! Bafana Bafana coach Stuart Baxter has called his son‚ Lee Baxter‚ who is  the goalkeeper-coach of Kaizer Chiefs to take over as goalkeeper-coach for the Africa Cup of Nations qualifier against Libya.

Lee Baxter comes as a replacement for Andre Arendse‚ who SAFA says has family commitments to attend to.

@BafanaBafana head coach Stuart Baxter has called up goalkeeper coach of Kaizer Chiefs Lee Baxter to replace Andre Arendse who has been withdrawn from the squad due to family commitments. Bafana Bafana face Libya in an AFCON qualifier on Sat 8 Sep 3pm @SAFA_net pic.twitter.com/d5AAEIDqLw

The goalkeeper coach took to Instagram sharing his excitement.

“What an Honor and a privilege it is to get called up for the National team as Goalkeeper Coach. A proud moment in my career. Always a massive thanks to all the people who support me in my job. A BIG thanks to my club [Kaizer Chiefs] for believing in me and backing me,” Baxter said on Instagram. 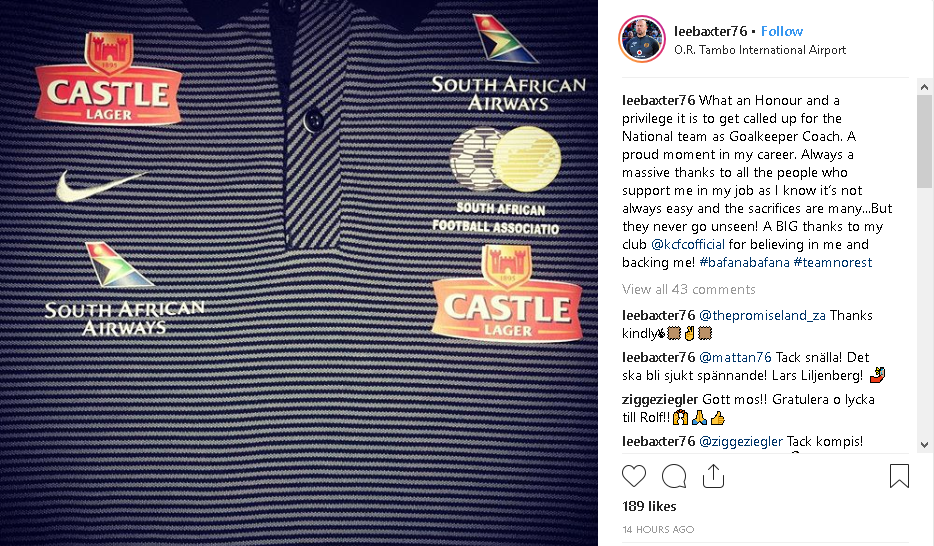 Here’s how football fans reacted to Lee Baxter’s call by his father.

Who Stuart Baxter ropes in at Bafana Bafana to help him isn’t important. As long as we get the results we want it’s fine. We don’t want to choose for him and then have him putting all the blame on us when he’s failing. pic.twitter.com/qZUQBd2Zdg

This is nepotism, how can Stuart Baxter appoint his Son?

Why do we always have to be negative ? ??? Hands off Stuart Baxter , let the man do his job and deliver results. Who will ever be the perfect person for the Bafana job if all we go is criticize?

Finally, Stuart Baxter has done it. His son Lee Baxter is the Bafana Bafana goalkeeper coach for the Afcon qualifier against Libya in Durban. pic.twitter.com/qzcp1ncoRA

Stuart Baxter flexing his white privilege by pulling nepotsim of the highest order..

appointing his son, as goal keeper coach for Bafana Bafana

Check Out Shabba's Farewell Message To Kaizer Chiefs And Fans