Orlando Pirates striker Kermit Erasmus is looking forward to the opportunity to test his skills in the CAF Confederations Cup final next month. Orlando Pirates progressed to final of the continental show piece after their 5-3 aggregate win against Egyptian giants Al-Ahly. Erasmus scored the important equaliser, and away goal, to bring Pirates level.Erasmus was not allowed to play in the 2013 CAF champions league. 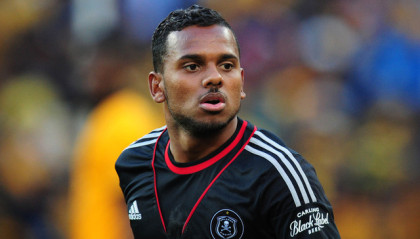 “It’s a great feeling. If you recall when I signed for Pirates I couldn’t play in the Champions League because I was cup-tied,” Erasmus told KickOff.
“It was a little bit frustrating because it was something I wanted to be a part of. But everything happens for a reason and now is my time representing Pirates in the African continent, and here we are in the finals.

“I am happy to contribute and help the team get into the finals. And so for me it’s a great honour to be part of the team known for making history and hopefully we will lift up the cup.”

Rantie Out In The Bafana Bafana Squad Due To Thigh Injury