South Africa is celebrating June as Youth Month to commemorate June 16 1976 events of the Soweto uprising,

“The Soweto uprising is one day where we get reminded of where we come from as a nation,” says Kaizer Chiefs Chairman, Kaizer Motaung, “We must use this occasion to gain inspiration and courage to fight against all forms of oppression. The class of 1976 was resolute and demanded change, and that change came at a huge cost, loss of lives. We do not want to go back to using the same methods to fight the system. Let us organise, mobilise and campaign against laws that seek to condone oppression. The use of voting for the leaders that will change the world is one form of bringing reform.

“I want to take this opportunity to salute the young people,” says Motaung, “I am intrigued by their energy and will to change the world. I observe around the world the young people are leading the protests and making their voices heard. This is the spirit that we must support as part of the resolution to bring change.”

Motaung is no stranger to advancing the black struggle. His black consciousness started at an early age. Despite his pioneering spirit of spearheading the formation of Kaizer Chiefs in 1970, during his playing days, Motaung was part of the Orlando Pirates’ class of 1967/1968. The team played in the NPSL – the black football league in the then racially divided South Africa. The team wanted to prove itself by playing Highlands Park, the best team in the NFL – the white football league at the time.

The then House of Assembly member and known Apartheid enforcer Jimmy Kruger threatened to disband the club and went as far as calling for banning of the team from playing on municipal grounds. Motaung and his compatriots travelled by road to play in Durban and Cape Town in defiance of Kruger, who also ensured the team was refused permission to travel to Swaziland and Lesotho. It was this team that planted a seed that led to soccer amalgamating into one non-racial league.

“The struggle continues,” says Motaung, “it is sad to see the protests spiralling into acts of looting and vandalism. While I call on sanity to prevail under dire circumstances, I do however understand that this act of looting is prompted by the desperation and lack of compassionate leadership. All that is required now is leadership to act and walk the talk of transforming the world and not retaliate with force as we are witnessing in some peaceful demonstrations.”

At home, in the 80s, Motaung and his counterpart Dr Irvin Khoza played a role facilitating a truce in the political violence in KwaZulu Natal. In the 90s, Kaizer Chiefs and Orlando Pirates started the Vodacom Challenge and launched it in KZN aimed at addressing the violence in stadiums‚ and the violence in that region.

“I wish to thank our players and officials who have expressed their displeasure through their social media posts. I am also encouraged to see football clubs around the world showing their support in the ‘Black Lives Matter’ campaign. This is not the struggle of the American people it is a Global matter that calls on all of us for action.”

Ironically with the killing of George Floyd happening in the USA, Motaung played football in the American League for Atlanta Chiefs and Denver Dynamos from 1968 to 1975.

Covid-19 has swept and claimed lives in the world, Motaung says: “We are facing the world’s greatest pandemic that we have witnessed it does not discriminate. We should unite as the people on this earth to fight to eradicate this pandemic. I wish to salute our President Cyril Ramaphosa for leading us in these difficult times. I wish to thank the South Africans for heeding the call for Lockdown Levels and adhering to the regulations and safety measures that have been put in place to curb the spread of the virus.”

Motaung has urged the people to not lose hope and commemorate the day responsibly and with discipline. 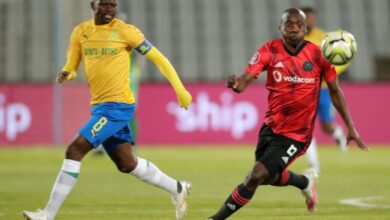