Moudy Mudzielwana Hopes Dylan Kerr’s Experience Will Help the Team! Black Leopards have already made a managerial alteration only 3 games into the season.

His sacking was not a result of the poor results, but rather of his unhappiness with the management at Black Leopards.

The Belgian has swiftly been replaced by former coach Dylan Kerr. He himself was fired from Baroka FC only a week ago!

Club CEO hopes that Kerr’s experience with Black Leopards and the PSL will hold the team in good stead.

“We thought let’s take someone who understands the club, and now we have someone who knows the club well” Moudy Mudzielwana told Sowetan.

“You were there when we launched the season in Johannesburg when we said we want the top eight, and the coach [Aussems] said something different. He was not prepared to push that hard and we said let us get someone now.

“It is not like we were fighting with him, but his mind was just not here. Kerr was there earlier [at training] and the attitude; you could see that he wants to achieve something with the club.”

The have brought in experienced players in the likes of Rodney Ramagalela, Lehlogonolo Masalesa and Mohammed Anas. The trio began training with Kerr on his first day back at the club. 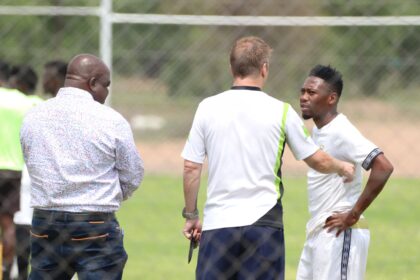 “We have signed Ramagalela. Masalesa has signed also. We are finalising a deal for Mohammed Anas from Polokwane City,” Mudzielwana added.

“The previous coach did ask for players and we did give him, but we thought he would take time to adjust. We had a strategic plan last week where I presented the vision of the club and I could see he was not buying into it.” He concluded.