Peter Shalulile Explains His Famous Tuck in During PSL Matches! Since making his PSL debut with Highlands Park, he has always stood out from the rest of his teammates.

Peter Shalulile will not ever be seen with his shirt hanging outside. It is consistently tucked in.

Be it at Highlands Park, Mamelodi Sundowns or the Namibian national team. Shalulile says that this is just how he was brought up.

“This thing of tucking in is coming all the way from home. If you are a man you must tuck in at home and it is a sign of discipline.” He tells the Sundowns website. 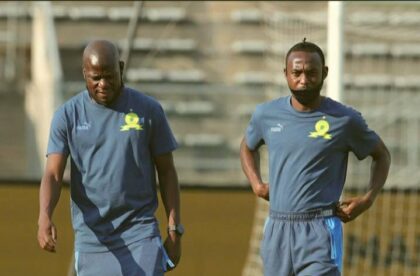 “My dad was in the army and that is how they were brought up. If you were in uniform, you must look representable and respect a man in uniform.

“So that is why I always make sure that I tuck in as a sign of respect, respecting my job and my uniform”

In his 6 league appearances thus far, Shalulile has scored 3 goals and provided 2 assists. What’s more impressive is the incredible playing relationship he has formed with Kermit Erasmus and Themba Zwane.

The trio have scored 11 league goals in between them so far. Kermit Erasmus is another new addition to the squad.

“I fitted in very well, I am still learning every day. When you play with great players daily, they make things easy for you. 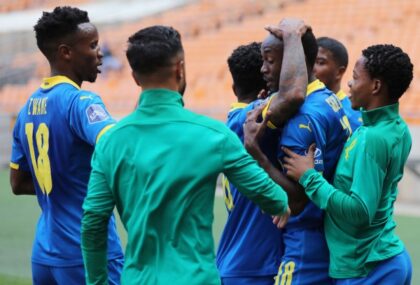 “I get help from coaches daily and on top of it, the telepathic understanding I am developing with Themba, Erasmus and the rest of my teammates is what makes me believe” Shalulile says.

“We have been working hard at training also supporting each other.

“We give thanks to the guys behind us, as they do all the hard work, from the keeper, the defenders and also the midfielders, it’s teamwork and that is what we are about at the club” he concluded.

Peter Shalulile Explains His Famous Tuck in During PSL Matches!

Josef Zinnbauer Celebrates One Year in Charge in Style!

PSL Show No Mercy For Sundowns As They Are Forced To Play!