Dare to be a hero and celebrity for a day? Helpmekaar Kollege pupil Lebo Mogoma experienced a walk in the hustle and bustle of the celebrity fast lane when Springbok 2019 World Cup winning captain Siya Kolisi and his wife Rachel offered the young protege a seat at the BrightRock Players Choice Awards in Hyde Park, Johannesburg, on Tuesday.

15-year-old Mogoma became famous and touched many hearts in South Africa during the Springboks Johannesburg Open Bus Trophy Parade when a video of him crying tears of joy as Siya and his teammates signed his boots went viral.

Both the young and the old, black and white, rich and poor came out and united to celebrate a famous and historic triumph by the South African national rugby team at the Rugby World Cup but it is the passion and emotion filled celebrations displayed by Lebo that really had everyone talking.

It is really heart warming and sincere for the humble Kolisi who grew up in rural Eastern Cape and his wife to track the young boy and inspire dreams and greater hope for a better future.

The teenager was further feted by being afforded the rare opportunity to speak to his hero Cheslin Kolbe via a video call and accepted an award on his behalf.

“We managed to video call Lebo’s hero @cheslin15 just before the awards started and Ches organised that Lebo collect his award on his behalf,” she said, thanking those who helped track down Mogoma.” said Rachel Kolisi on her Instagram page.

Lebo and his mother Dinah had the opportunity o grace the VIP section at the awards ceremony and Rachel Kolisi revels in such acts of kindness that in a small big way make a world of difference to many people.

Engen To Power Get Into Rugby And Springboks 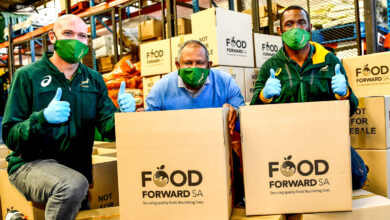