Jurgen Klopp Says Alexander-Arnold and Keita Could Return Against Wolves! He provided an injury update in the pre-Wolves press conference.

“Whatever we can do with that depends on how it looks,” Klopp said.

“There is a chance Naby and Trent can be in the squad, I would say.

Another injury blow is influential goalkeeper Alisson Becker who is out for a few weeks. He suffered a knock against Brighton last week.

He is likely to be replaced by midweek hero Caoimhin Kelleher who was man of the match against Ajax Amsterdam in the UEFA Champions League midweek.

“There are not a lot of reasons I could mention in this moment to say he will not start against Wolves, but there is training in between and other things, he has to stay fit, we have sessions. All this kind of stuff,” he said.

“But he has done enough to convince me [he can be Alisson’s deputy], but he did that already months and years ago. Sometimes you have wait for the right moment and we thought the right moment came on Tuesday.

Former Wolves player Diogo Jota has made an impressive start for Liverpool since joining the club. He has scored 9 goals in his 14 appearances at the club.

He says he is looking forward to having fans in stadiums; particularly this weekend as 2 000 fans will be allowed at Anfield. 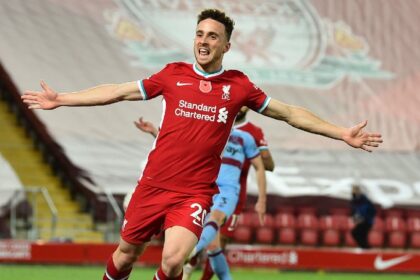 “Obviously when you play for a club like Liverpool that has one of the best atmospheres in the world, it just feels like something is missing.

“We have a lot of these conversations with the staff and even with the players [on] the things I am missing.

“Feeling the Anfield effect is the thing I’m looking forward [to] most.”

Jurgen Klopp Says Alexander-Arnold and Keita Could Return Against Wolves!

Ronwen Williams Wants SuperSport United to Make the Most of Their Extended Break!

PICS! Down To Earth Makaringe Spends Time With Future Stars

Peter Shalulile Shares His Everyday Routine As A Football Player