Orlando Pirates midfielder Fortune Makaringe became the talk of the day when he performed a bizarre ball trick in the latter stages as Pirates were headed for their 1-0 Absa Premiership win against Mamelodi Sundowns.

Pitso Mosimane expressed frustration at Orlando Pirates midfielder Fortune Makaringe’s showboating skill that included a quick shuffle and kneeling on the ball during the game.

South African showboating trait of tricks on the ball is done to entertain and whip up crowds at football stadia.

To some it is part of the entertainment value that draws crowds to the stadium.

“I’m just upset with one thing that happened on the pitch. It’s not good for football in my opinion and it’s not good for (Bafana Bafana head coach) Molefi Ntseki because he is here. The good thing is Fadlu came and apologised” Mosimane told SuperSportTV after the game.

Zinnbauer who has impressed with a promising start of three wins and a draw in four matches also shared his sentiments on the issue.

His response on Makaringe’s trick – avoiding slamming his player‚ and saying he will first try to understand showboating before deciding how to approach it – shows that‚ despite being nervous still in his English‚ Zinnbauer can come up with the right answers off the field too. 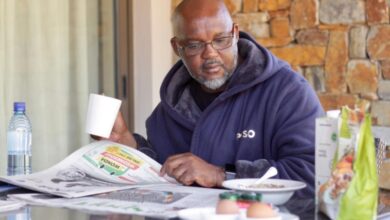